⚠️ Author’s note: This post is more than 5 years old. Technical information may no longer be accurate (or useful) and links may be broken. Continue at your own peril.

When I got home this evening, I set down my backpack and began catching up on the day’s events with my family. Generally it’s a story of errands and the like, but then Matthew started telling me about how he wanted to look nice this evening.

He was telling me about how he’d selected a nice pair of pants and a button-up shirt from his dresser, done his own hair, and even brushed his teeth!

As a parent, you’re frequently bombarded with a ton of information from your children, so you have to very quickly discern what’s valuable and what is not. Typically when I come home from work, I’m tired from a long day and exhausted from my bike ride home (which finishes with an intense climb up a hill to our house). Everybody in the house starts talking to me at once, and I’m generally only half-listening simply because I’m tired and need to decompress from the day.

Back to the story

As Matthew told me about how he’d gotten ready, I must confess that I hadn’t really even looked at him yet. So when he told me how he’d picked his clothes and done his hair, I finally took a look at him. “What’d you put in your hair?” I asked. “Gel,” he responded. “Shaving cream,” my wife corrected. “Ergh,” I groaned. “Guess who’s getting a bath tonight?” Just then, Matthew turned his head and I caught a glimpse of something in the light:

Did you see it? No? How about now?

That’s right, friends, Matthew — while doing his own hair — decided to take the trimmers from our bathroom and shave some lines into his head. Wonderful! Seeing this, I decided to do the only thing that a respectable father like me could do: shave his head.

I’ve always wanted to do this

After a bit of protest from his mother, I took him upstairs and told him to strip down to his skivvies while I looked for some scissors and a better trimmer head. He was pretty unhappy that I was going to shave his head, but since that’s what must happen when a little boy cuts his own hair, there wasn’t much to argue about. If you want to see the entire process, check out this photo set on Flickr. The short version? He ended up like this:

Ultimately, he decided that he didn’t want to go through that again, so I’m hoping he’ll avoid this sort of hair care in the future. Until then, he’s my lucky, bald-headed little monkey. 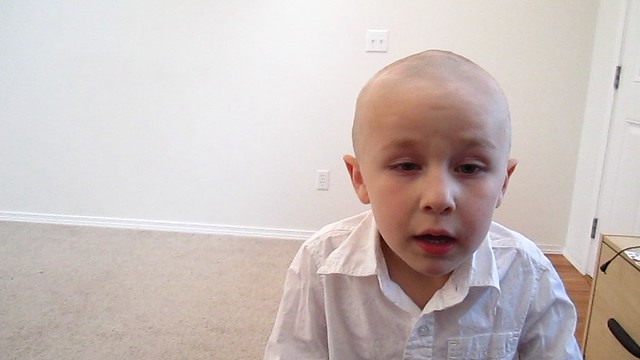 Ryan Parman is an engineering manager with over 20 years of experience across software development, site reliability engineering, and security. He is the creator of SimplePie and AWS SDK for PHP, patented multifactor-authentication-as-a-service at WePay, defined much of the CI/CD and SRE disciplines at McGraw-Hill Education, and came up with the idea of “serverless, event-driven, responsive functions in the cloud” while at Amazon Web Services in 2010. Ryan's aptly-named blog, Flailing Wildly, is where he writes about ideas longer than 280 characters. Ambivert. Curious. Not a coffee drinker.